One other note of interest: he commented that if you want to help jazz musicians, buy a physical product (CD, DVD, whatever).
He noted that for every person who streamed an album via Spotify, he got something like $.06 per album.

Another musicians say that the most important is to go hearing them on scene … CD and DVD are not such remunerative and especially for Jazz musicians (and other not very popular styles ).

About the difference of remuneration between CD and streaming , it would be interesting to know, not much communication about that . But it must be very different situation between Coldplay or Bruno Mars and Theo Crocker .
It must be very different too, if they produce and do their own Cd and sell them during tour , i imagine . Theres such a gap between popular and wellknown singers, and jazz musicians . The financial philosophy of big companies and remuneration of musician in general, is really not favourable for jazz musicians …

PS but we get away from Funk and fusion so i create this very interesting new topic . Thanks @scott1 to open this discussion

heres an article about the progress of the industry of music 10% more of profit in 2018 music sales represent 19 billions in the world !!

it is not directly about the remuneration of musicians, but more to add in the perspective of this discussion

“We all remember the previous years, it was the festival of tears, we had only bad results to announce”. On Tuesday, April 2, 2019, Frances Moorre, Director of the International Federation of the Phonographic Industry (IFPI), presented the organization’s annual report in London.

Behind this figure lie two opposing dynamics: the streaming market (subscription and advertising), in full expansion, has grown by 34%, to reach 8.9 billion dollars (7.9 billion euros) in figures business, largely offsetting the decline in paid downloads (-21.2%) and especially physical sales (-10.1%).

These evolutions prolong the reconfiguration of the music industry: it only earns a quarter of its revenue from physical sales, almost half of that of streaming (47%). Next are shows and concerts (14%) and downloads (12%).
Regional disparities

Despite the growing role of legal listening platforms, piracy is far from gone. “That’s 120 million unique users a month,” Frances Moore told AFP. "It’s hacking to download and own music from streaming platform. There are also entire discographies that are still accessible via other forms of download, including torrents, "she lamented.

At the regional level, very important disparities appear: in North America, where the transition from physical formats to digital is very advanced, sales increased by 14% in 2018, against only 0.1% in Europe. The most dynamic market remains, like last year, Latin America, with a growth of 16.8%.

In terms of album sales, the first soundtrack of the film The Greatest Showman, the South Korean boy band BTS and the American Lady Gaga are in first place. The posthumous disc of Johnny Hallyday, My Country is Love, ranks fifth (1.7 million copies).

Vinyl, a format popular with enthusiasts, confirms its return to grace with sales increasing for the thirteenth consecutive year (+ 6%). It now represents 3.6% of the total turnover of the music industry.

Hi Pierre,
That’s a really great question and I’ve been wanting to answer all week, but got caught up and I knew this would be a long response and somewhat difficult, but I’ll give it a go now…

Both individuals as well as corporatized labels do better from the sell of physical Cd/vinyl than streaming.
But there’s no changing the fact that people don’t even have CD players on their computers anymore and it’s a dying technology.
Vinyl, which has a small but steady market, as well as downloading mp3’s are a better payout than what streaming pays.

Streaming Payout Has Gone up, but to What?

The streaming payout just went up in the US due to the Music Modernization Act last Fall in the US. And I believe something was recently something passed in the Eu regarding streaming as well, in favor of musicians. But it’s very complicated legislation. I’m involved with a group called Musicians for Musicians which is about circling the wagons, bringing musicians together to understand the new laws and landscape of being a musician. Many of these older musicians have watched the devaluation of their craft. And even greats like Billy Harper, who have been on the scene awhile, see the effects. Everyone is having a tougher time. The group consensus of MFM seems to be that the best move for musicians is to take it into their own hands, empower themselves thru understanding the legalize and run their own small biz, or go to small labels, rather than get big contracts.
So to that idea - going straight to the musicians to buy cd/vinyl/downloads and/or merchandise is the best way to support them, in my opinion. Some musicians even have patreon accounts, ect.

Following and Streaming do Support as well

However, the #'s on social media and streaming platforms such as Spotify really do count towards getting these musicians into the right opportunities. I’ve been told by a booker in the biz for 40 years that he’s never used a video or sound clips to book a band, it’s always about the #'s - how many people will show up and pay for the tickets…
So these days, it comes down to the #'s of people following on social media, as well as streaming - for good opportunities such as festivals, the musicians have to have these analytics.
Point being - streaming and following them is an important part of supporting the musicians you love too. It can translate into better paid situations.

Support for Local and Touring Musics thru Attendance

When it comes to touring, I know many musicians who are doing DIY tours so going to hear them directly is important to keeping the grassroots movement of music going. As well as being patrons of local live music venues near you. Many young people don’t seem to have a value for live music. They prefer electronic, virtual, ect so some feel it’s a shrinking market.
And You’re so right there is so much disparity between the mainstream and the local level in the music industry. But in my opinion there is a smaller gap in talent and skill level between these acts. At least here in NYC. Breaks my heart to hear some of these AMAZING jazz cats who have dedicated themselves to their craft but just struggle constantly to support themselves. Many drive Lyfts, ect because the schedules are flex and they can still jump on gigs that many complain are getting more scarce, with less pay, and worse conditions for the musicians. Gets you in touch with your humility tho as many will still endure all this and more just to keep the music going.
I think it’s awesome that the PG community cares about this and it’s something we should discuss from both sides.

How are musicians making it these days?
Ideas and innovations in how to support live, local, real music as well as the rising artists we really love.
The flip perspective - How do the music lovers like to listen to music these days? Are you still buying/listening to Cd’s? Are you going to youtube? Radio? Spotify? Do you buy merch? Follow your favs?
And how are people finding the new music you love? I know personally I hear a lot of great music thru film and Tv placements, then look up the artist afterwards. As well as references from friends, other musicians, and here on PG.
Honest information could be valuable to musicians who have to stay proactive in making musician accessible with less and less external support until they can prove they are profitable.

I can share some of the feedback at MFM mtg. They have a lot of resources if anyone would like to dive deeper into the legislation and logistics of the music biz today.

We rarely take the time to think about that , even more as listener and music lover . And this business is really changing quickly those last years

Oh wow, that’s very telling. Both articles because one indications a rise in sales recently, but I don’t think it’s making it’s way back to the working musician. One good thing about jazz musicians tho is that innovation is born from creativity. Solutions for how to keep the music going are coming from that pure creative space that Jazz Musicians thrive in so I’m still optimistic. But the sacrifices they make for their music, I see it everyday and to me they are modern day heroes championing the fight to keep the jazz music alive.

the sacrifices they make for their music, I see it everyday and to me they are modern day heroes championing the fight to keep the jazz music alive.

+1 totally agree with you .

And on a related note, this sad news about the great Kenny Burrell. 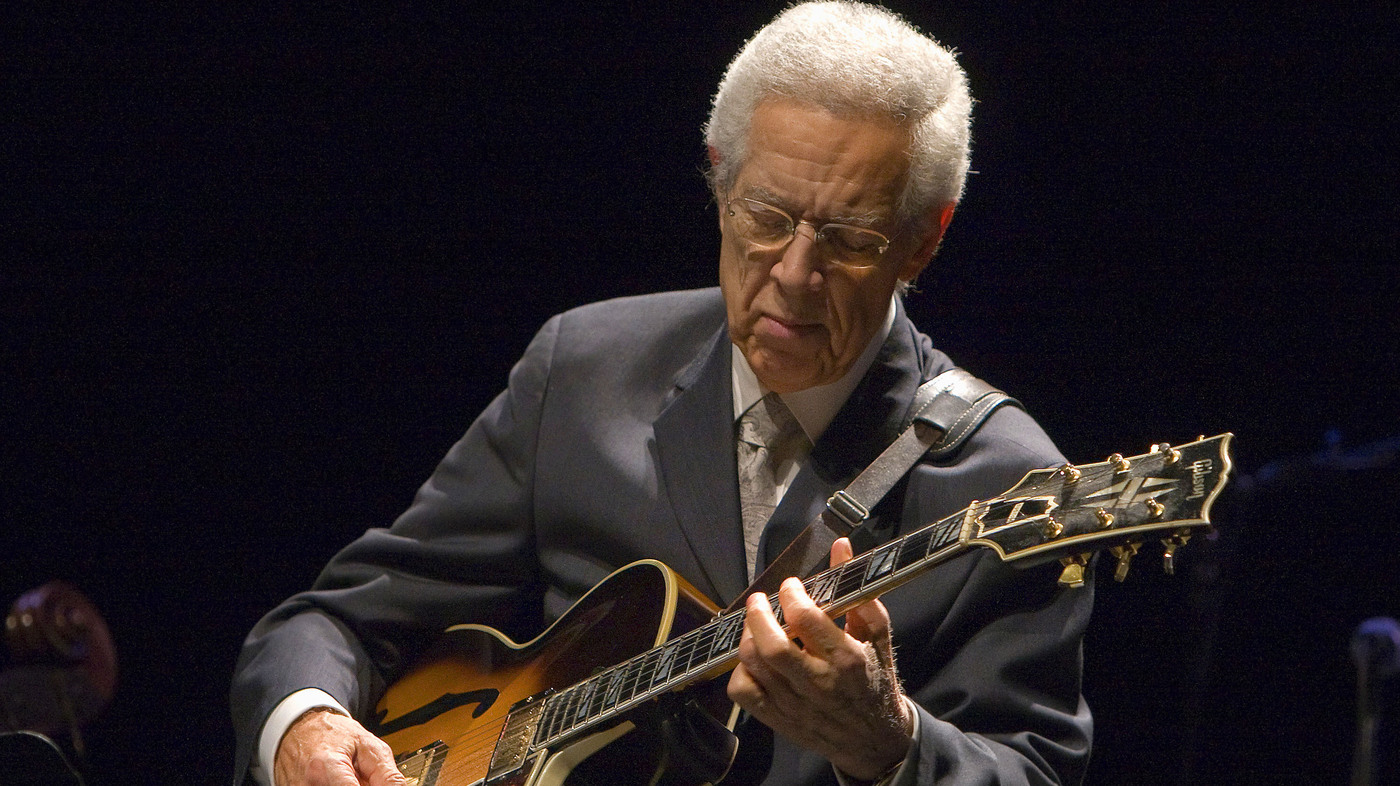 Kenny Burrell's wife launched a GoFundMe campaign, aiming to raise $100,000 to relieve their most immediate needs — an increasingly common course of action.