We have just launched our “Intro To Hammond Organ” course and a very warm welcome to @robert as the newest member of our teaching team.

This course focuses on the jazz blues in F and we cover the following topics:

The course page has been added to our blues lesson library: An overview of the topics covered:

The following 4 lessons in the course are organ-specific where we explore the controls and intricacies of the Hammond B3:

The ideas and concepts covered in the following 5 lessons are relevant to anyone studying jazz and blues piano. Robert shares a lot of valuable insights that we can apply to the jazz blues on both organ and piano:

All of the walking bass lines, comping voicings, and improvised phrases have been notated and can be downloaded on each lesson page. Here is a summary of the downloads available:

We will shortly be posting a recommended listening list of jazz organ recordings and albums.

Listening and transcription is an essential part of our development as jazz musicians and so we must spend the time to listen, transcribe, and immerse ourselves in the music!

Thank you @Robert for creating such a wonderful introductory course on Hammond organ!

Thanks Hayden for deciding to include an organ section, and Robert for creating the lessons. I haven’t had time to work through them yet, but I have looked through them and sampled some of the videos. Pretty excited to get started!

It was a very interesting project to work on.

Working with a real Hammond B3 organ was both fun and challenging to coordinate!

We put a lot of work into devising the new lesson layout, camera angles, and graphical elements and myself and Robert are extremely happy with the result.

And @Hayden, special thanks to you for welcoming me so warmly and for the collaboration in getting these lessons together for PianoGroove students.

I’m happy and proud to be here, and I’m eager to answer follow-up questions and try to clarify anything that comes up as folks digest the lesson material.

As Hayden promised, I’ll soon be posting a short list of listening material for inspiration as well as specific illustrations of some of the techniques I covered in the course, and I’ll put a link to that posting here on this thread as well once it’s up.

I’ve just shared links to a few of my favorite Hammond Organ performances that relate to concepts covered in the new course. You can find that post at Suggested listening for Robert's Intro to Hammond Organ Course

I’m not total clear about the difference between the upper and lower keyboard : when using the same drawbars settings on both they dont sound the same right ? I have no hammond but two keyboards the MP7 kawai and the Nord electro5D which sound pretty nice for hammond . I put the electro5D ,with manual drawbars ,on the top of the Mp7 ; they have only 9 drawbars that are for an upper keyboard imagine ? So i have to find two different setting . Before looking further in the different possibilties of the keyboards for hammond . Want to be sure of this point , and be happy if you have some ideas for setting it the best way. I finished visioning the Anatomy of the Hammond and got already some clear ideas about the upper keys.

Any manuals or paper method about the Hammond B3 an his playing , you recommand ?
Thanks for your help.

Pierre, you asked about any manuals or paper methods. You might check out Dave Limina’s Hammond Organ Complete. It covers a lot of basics and offers examples of drawbar settings for various sounds and artists.

I agree with Pierre, Robert. You’ve done a super intro to the Hammond B3! Back in the day when I was playing regularly (1965-74), I had a Hammond M-100 series organ with a half moon switch and an old Leslie. Kept the organ on dollies to move it from gig to gig. I’ve played Bs but never knew about the controls with the left hand black keys. Now I’ve got a Hammond Sk2 with a half moon switch. And after having seen your intro, I need to review it more carefully. Truth is, I bought the Hammond, then found Hayden’s PianoGroove. I got intrigued with the piano again, bought a Roland RD-2000, and basically ignored the organ for the past year. With your new course, you’ve renewed my interest. Now, I’ll have to split my time between both keyboards. Again, your new course is very welcome. Thank you.

Here’s an example of the Sk2 in case you’re not familiar with it. 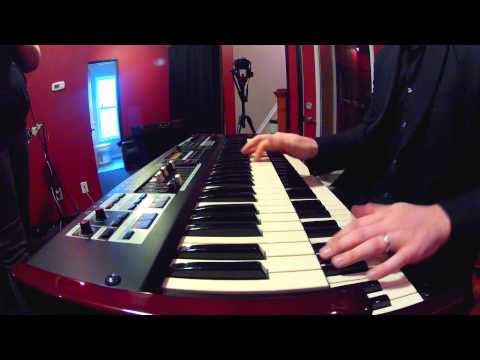 @scott1, thanks for your enthusiasm and kind words about the new course; I’m glad you’re liking it. Also it’s fun to learn a bit of your back story, especially since it involves Hammond organs.

I’m familiar with the SK2 but not deeply familiar. Like most active players, I use a clone on most of my gigs because the Hammond consoles are a lot harder to move around. The SK2 has a good reputation among folks I’ve talked to, and I’ve actually seen and played one once, quite some time back. Lots of players say the SK series is the best compromise for players who want a two-manual organ with a good selection of piano and other keyboard sounds built in. Those other sounds are absent from a lot of clones, including mine.

I’m not total clear about the difference between the upper and lower keyboard : when using the same drawbars settings on both they dont sound the same right ?

Any manuals or paper method about the Hammond B3 an his playing , you recommand ?

@Robert You seems not having seeing my questions above. Thanks for your help.

Ooh, you’re right, I had missed that you asked me some questions! I’ll reply to the post where you asked them. Thank you for pointing this out.

I’m not total clear about the difference between the upper and lower keyboard : when using the same drawbars settings on both they don’t sound the same right?

Mostly they do sound the same, but the situation is a little confusing for two reasons:

First, they sound the same only on Hammond console model organs. On spinet models (which are smaller and which have several other differences – examples are the M-3, M-100, L-100, and many others), the upper-manual drawbars and the lower-manual drawbars are different. I used to own an M-3 but it’s been so long since I played one that I no longer remember how to describe the differences. But I can tell you that the differences make it pretty impractical to play bass on a Hammond spinet organ. But on console models (B-3, A-100, C-3, and their ancestors like the -2 series and the earliest Hamonds like model A, BV, etc.), the drawbars are all the same and you can make the upper and lower manuals sound identical to each other using the same drawbar settings.

Next you ask a question about using two different keyboards to simulate a two-manual Hammond console:

I have no hammond but two keyboards the MP7 kawai and the Nord electro5D which sound pretty nice for hammond . I put the electro5D ,with manual drawbars ,on the top of the Mp7 ; they have only 9 drawbars that are for an upper keyboard imagine ? So i have to find two different setting .

Because the upper and lower manual drawbars are sonically the same (except for percussion being available only on the upper one), I don’t think you will have the problem you expect. But one thing I recommend if you combine the keyboards is to use only one of them to generate sound, and connect the other one via MIDI as a controller. This way the sounds of playing the two keyboards will really be the same (when you set the drawbars the same).

Any manuals or paper method about the Hammond B3 an his playing , you recommand ?

I see @scott1 has already recommended Dave Limina’s book, and I second the recommendation. There is another good one by Brian Charette. Those are the two main resources on paper that I’m aware of.

I’m not sure if this will help your understanding of the two manuals, but Jim Alfredson (of the demo above) says of the lower: “I use 808 000 000. Some folks like to put a bit of the second drawbar in there, like 828 000 000.” Also, I came across this on a Nord forum that might be of interest The topic was “How important/essential is the lower manual?”

Depends on your playing style. For jazz/solo work, having two manuals is another way of compensating for not having touch sensitivity as you do on the piano. Solo on upper manual, accompaniment on the lower, or just two different settings you can combine with either hand to give variation in dynamics (you can set the drawbars the same on both and have percussion on the upper, for example, then play what you want to empahaisis [sic] on the upper manual.

Thanks a lot for your pro and complete answer Robert !

But one thing I recommend if you combine the keyboards is to use only one of them to generate sound, and connect the other one via MIDI as a controller. This way the sounds of playing the two keyboards will really be the same.

Interesting but the sound would be same on both keyboard so no need of two different keyboard in this case , or did i miss something ??

About using one keyboard to generate the sound, I understand why you expect that the sound would be the same for both, but the answer is no, that’s not the case. I’m not familiar with the MP7, but I’ve got quite a bit of experience with Nord keyboards so I’m pretty confident about what the Electro will do.

Check out the description under “MIDI Upper Split Feature” on this page and also it might be worth looking at some forum discussions like this one where people talk about using the Electro in exactly this way.

Hopefully you insist on this setup, i will probably never have gone this way otherwise . Was a bit painful and not very intituitive to understand how to manage , but i got it works with the electro5D . I was mainly using the electro5d for his lovely piano sound especially the new White grand

So i will put here how i setup the electro5D , this could help another ,and maybe myself if i try to change it in some month

PS important to notice even it is a been unintuitive in the menu. the external keyboard can only play the upper part of the NE5 (or both part )

So now just setting up organ on the lower and upper part on the NE5 .

The expression pedal must be put on the nord electro5d and the CTRLPED must be activated only on the upper keyboard so in my configuration in lower part of NE5d (otherwise the sound of the external keyboard will be too low). For doing that we press Shift + CTRLPED (button under octave shift)