I am a beginner.

I have practiced my 251 progressions looping around the circle of fifths with my left hand using 4 note 7 chords. I am not yet proficient with shell or rootless chords or upper structure chords.

I am wanting to play Autumn leaves with 4 note 7 chords using my left hand and the melody with my right hand on the upper console.

As I play the chord porgressions, the natural movement of the first note of the chord, usually played in some inversion, ( shown in red) seems to be lower on the bottom console of the organ. By bar 26, the sound begins to get muddy.

If I constrain the chords between the octave, it doesn’t sound right. Where would you situate the playing of the chords ?

I hope the question is clear ? Thanks in advance for taking the trouble to answer. 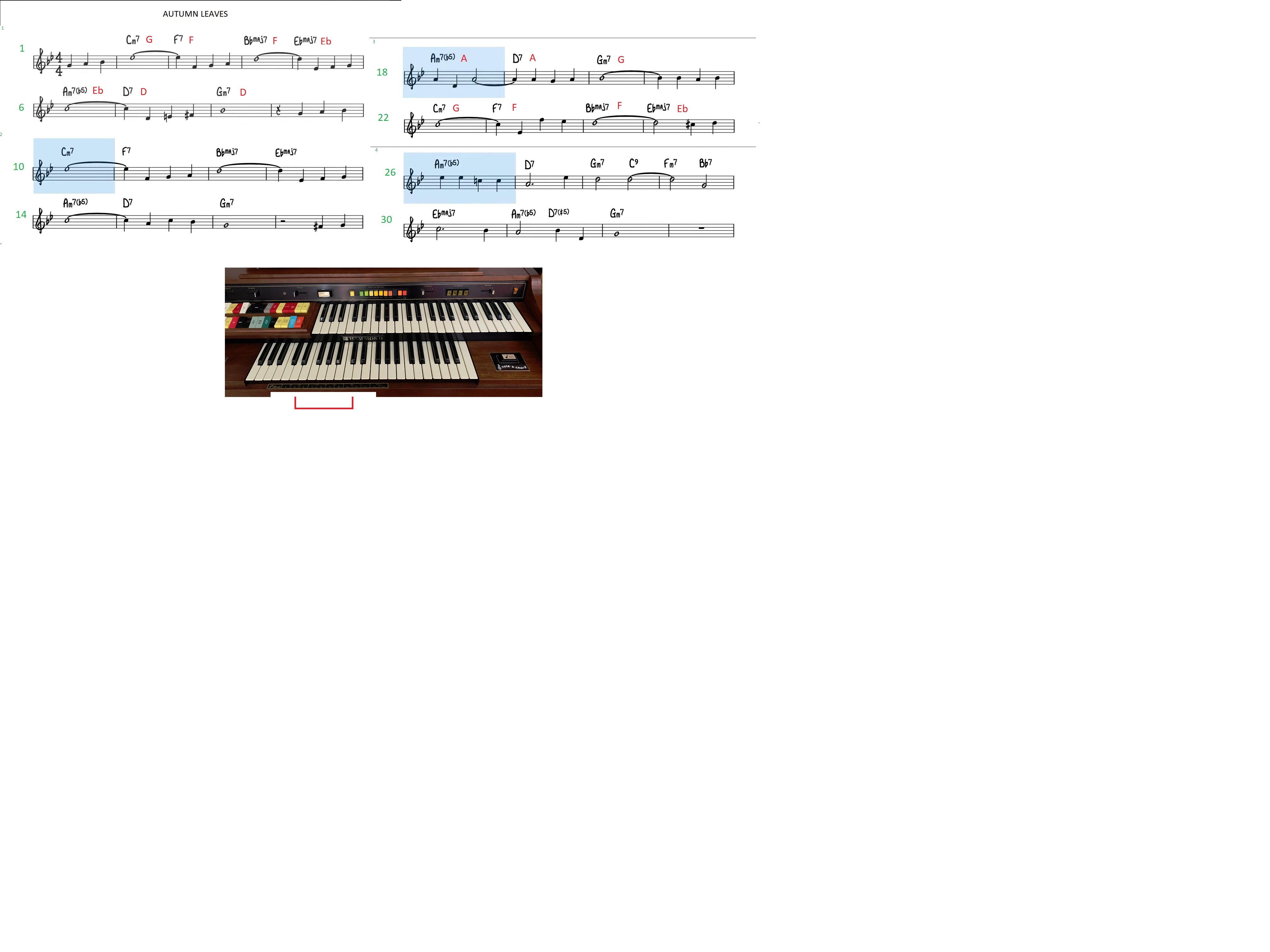 Welcome, Angelo! I will try to answer your questions, and yes, I think the question is clear.

I have to start by saying that the organ you’re playing, the Hammond Super Dolphin Deluxe 9822km (if I’m not mistaken) is very different from the Hammond console organs that use tonewheels. So you are going to need to use some different techniques to make it sound good, and even if you do everything perfectly it will still not give you the sound of the most widely used Hammond tonewheel organs. The best instrument is always the one you already have, so definitely keep playing! But also understand that if you want to get serious about jazz organ you will want a better instrument to help with some of the challenges you’ve already encountered.

I’ve never seen an organ like yours in person, but I did a little reading about it and one of the challenges is that the lower manual doesn’t seem to have any 4’ tones to offer. On any instrument, using chord voicings that are too low for the instrument will cause them to sound muddy, and really there are only three things you can do to make it better:

If I understand correctly, your instrument doesn’t allow you very many options for changing the sound in a way that will sound good and that will bring the pitches you need into the octave on the lower manual that you indicated. This means that you might need to use different chord voicings or you might need to move your voicings upward into a different octave on the lower manual.

Because I’m not familiar with your specific type of instrument, I can’t tell you where in the lower manual range the chords are going to sound good. There is even a possibility that they will not sound good anywhere.

You must use your ears to decide where to put the chord voicings, and as you do this, you’ll find that it’s pretty challenging to make your accompaniment sound good with only four-note voicings that use only chord tones. I presume this is what you meant because you’re not using so-called “rootless” voicings, so I’m thinking you are playing 1-3-5-7 of each chord in whatever inversion has the bottom note that you indicated in red.

You might be able to get your accompaniment to sound good that way, but I think you will be using your time better if you work on expanding your vocabulary to include the rootless voicings that you currently don’t use. Upper-structure voicings are normally two-hand chords, usually with the melody on top, and for now on the organ I recommend you don’t worry about those at this stage.

An easy path to rootless voicings for you might be to use your current four-note chords as a starting point. In each chord, simply drop the root and the fifth so you’re left playing only the third and the seventh of each chord. Those two-note chords are perfectly good rootless voicings already! Now if you want to enrich those voicings you can start by choosing one note to add to each (usually not the root nor the fifth). For example, in a m7 voicing you might choose to add the 9th, so for example, Cm7 could be voiced Eb-Bb-D or D-Eb-Bb, etc.

If you do that, you’ll be using two-note or three-note voicings instead of four-notes ones, and already this will make the sound less muddy and more clear.

Please continue the conversation with any follow-up questions or discussion you’d like.

Thank you for the fine explanation. I read through it all with lots of interest.

I applead your solution of changing the timbre of the lower console, on which the chords (1-3-5-7) are being played. That did it.

Thank you for letting me know my options.

Since i have practiced the (1-3-5-7) chrods for the last month or so, I wanted to apply them as I learned and practiced them in this song.

Next step is rootless chords + root on pedal.

Thanks for sharing all this insight Robert.

the Hammond Super Dolphin Deluxe 9822km (if I’m not mistaken)

My “Roland FP-30” sounds a little boring in comparison

Next step is rootless chords + root on pedal.

We have a full course dedicated to rootless voicings @angelo.

Before learning rootless harmony, we should first understand the concept of extended chords such as 9th voicings, 11th voicings, and 13th voicings. If that theory is new to you, first check out our course on extended voicings: The next step would be to move onto our course on Rootless Harmony: Here are 3 PDFs that will help you to learn rootless voicings:

I see you are working on the tune “Autumn Leaves” and so it would be a good idea to learn the rootless 251s in Bb Major, and in G Minor as a priority as these 2 progressions repeat throughout the form.

The PDFs above contain 4-note rootless voicings such as this 251 in Bb Major:

As @Robert suggested, you could remove notes from these voicings to create a more pleasing sound on your organ. Here is the same progression but this time using 3-note rootless voicings:

Finally, we can simplify these voicings further to just play the 3rds and 7ths:

Experiment with each of these and any further questions let us know. Cheers!

Thx Heyden for the extra contribution. I will work on these suggestions…I am sure the result will be worth it !

Thx for the guidance.

Check out Robert’s wonderful course “Intro To Hammond Organ” where we discuss and apply rootless voicings over the jazz blues progression:

And if you are completely new to rootless voicings it would be worthwhile to study the beginner-focused lessons outlined in my post above.

Cheers and enjoy the lessons!