I’m breaking this off from another thread for those who like me might be interested in learning Logic Pro (or expanding their skills}. Fellow member, @gregb, noted:

[W]hat I’ve done over the past few weeks (I’ve still got 70 days left on my Logic free trial) is listen several times to the series of YT videos from Joshua Carney (MusicTechHelpGuy on YT). He’s got >100 videos, the ones that I’ve looked at are part of a 12 part series, Logic Pro 101. You can buy the series for $10 from his website or watch them for free (with annoying ads) on YT.

They are, indeed, very good and quite easy to understand. Another way to get them in an organized (ad-free) fashion is via the course “Logic Pro 103” on Ask.Video. It’s $25 for a month of access. That’s enough to get the basics under control and then some from various instructors in other courses.

It’s really quite a good deal–there are 35+ video classes on Logic Pro available from beginning to very advanced. (It’s $12/month if you opt for a year-long membership.) I’m not promoting the site, just suggesting another source of information. It also covers most of the other popular DAWs, as well as other topics.

Greg, I’d say, buy the program. There’s a feature called Smart Tempo that I don’t fully understand but seems worth the price on its own. At any rate, here’s the link if anyone is interested. Enjoy!

Great idea for a thread @scott1

I can share some very basic tips from working with Logic over the years.

A brief update on learning tools. I do think the Josh Carney series are useful. More recently, I realized there’s a great set of tutorials on what used to be Lynda.com and is now LinkedIn Learning. I get this for free through my work, so I’m not sure how much it would cost to subscribe, but one of the nice things is that the tutorials can be downloaded to an ipad or phone and used offline for up to 30 days. I’ve been using one called Logic Pro Essential Training by Scott Hirsch, and like it a lot; it reinforces some of the stuff in the Josh Carney series, covers some different topics and questions, and strikes the right balance with regard to detail and comprehensiveness.

Smart Tempo is most powerful when applied to audio tracks. It also works for midi tracks but I find it easier to to use automation and/or piano roll editing to make changes to midi track timing.

Thanks for the information about Smart Tempo!

I remember Lynda.com. In the mid '90s, I was into html coding, web graphics, and web page design, and I used several classes from that site trying to put together a college-level online sophomore English literature survey course that ranged from the Romantics to the early 20th century. It was early days then with online classes.

@gregb, @hayden, and any others:

I was wondering if those of you who are using Ravenscroft in Logic might share any different settings you find of interest (e.g., mike placement., reverb type and levels, and any other tweaks you may have come across?

It’s great out of the box, but I’m finding so many possibilities.

Hi @scott1 and thanks for keeping this going.

I’ve been really happy with Ravenscroft + Logic, so much so that it’s all that I use now for everything–practice, playing, and recording (obviously). What I like about practicing and playing with this setup as opposed to Ravenscroft by itself is the ability to use the Logic metronome for practice, the ability to add an additional layered VST from Logic, and the ability to record ideas on the fly–it’s especially helpful when I’m working on an arrangement, since sometimes I’ll play 4 bars that I like but then while figuring out the next 4 bars I forget what I played previously!

But I don’t think there are any settings for Ravenscroft in Logic that wouldn’t apply to Ravenscroft by itself. I’m attaching a few screenshots that show my main template and here’s what’s different from default:

#2 and #4 will obviously depend on idiosyncracies of your keyboard, touch, and speaker setup. Speaking of which, my setup is extremely sensitive to monitor placement and room acoustics; for quite some time I thought the sound from my setup was way too harsh, but I eventually realized it was all because the monitors were too close to the wall behind them. So–I would suggest that you “tune” your sound first using high quality headphones to get it exactly the way you like it, and then try and mimic that with monitors/speakers by varying placement and/or EQ.

I looked through Hayden’s template and he has pretty close to default settings on the Ravenscroft, and the only thing he adds is a compressor that is most important when you bounce, i.e. record a project. But I haven’t done anything special to bounce, I just use the default Logic settings and it comes out OK. Everything I’ve posted here has been recorded that way.

I’ll be interested to hear about any other experience/opinions/feedback. 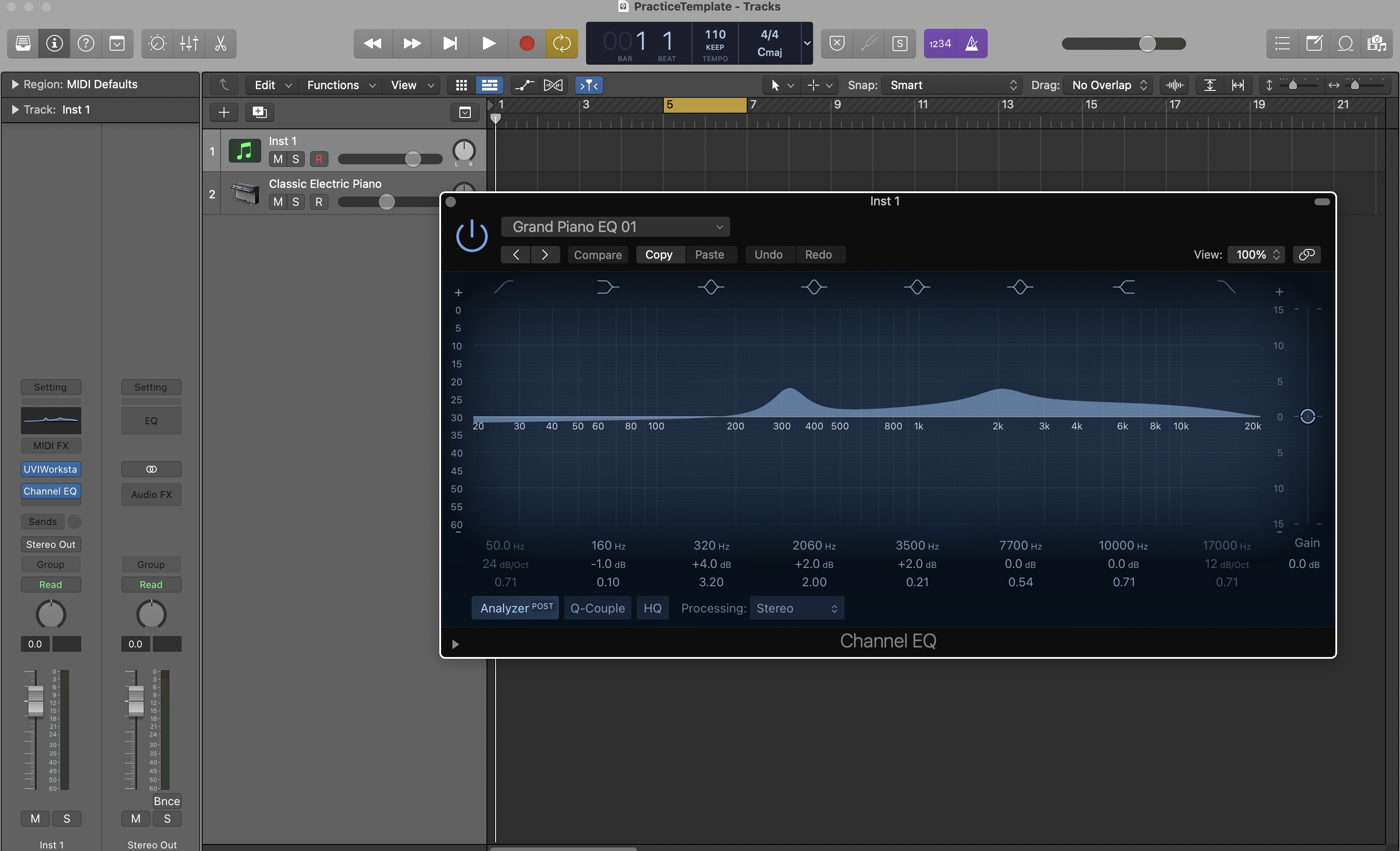 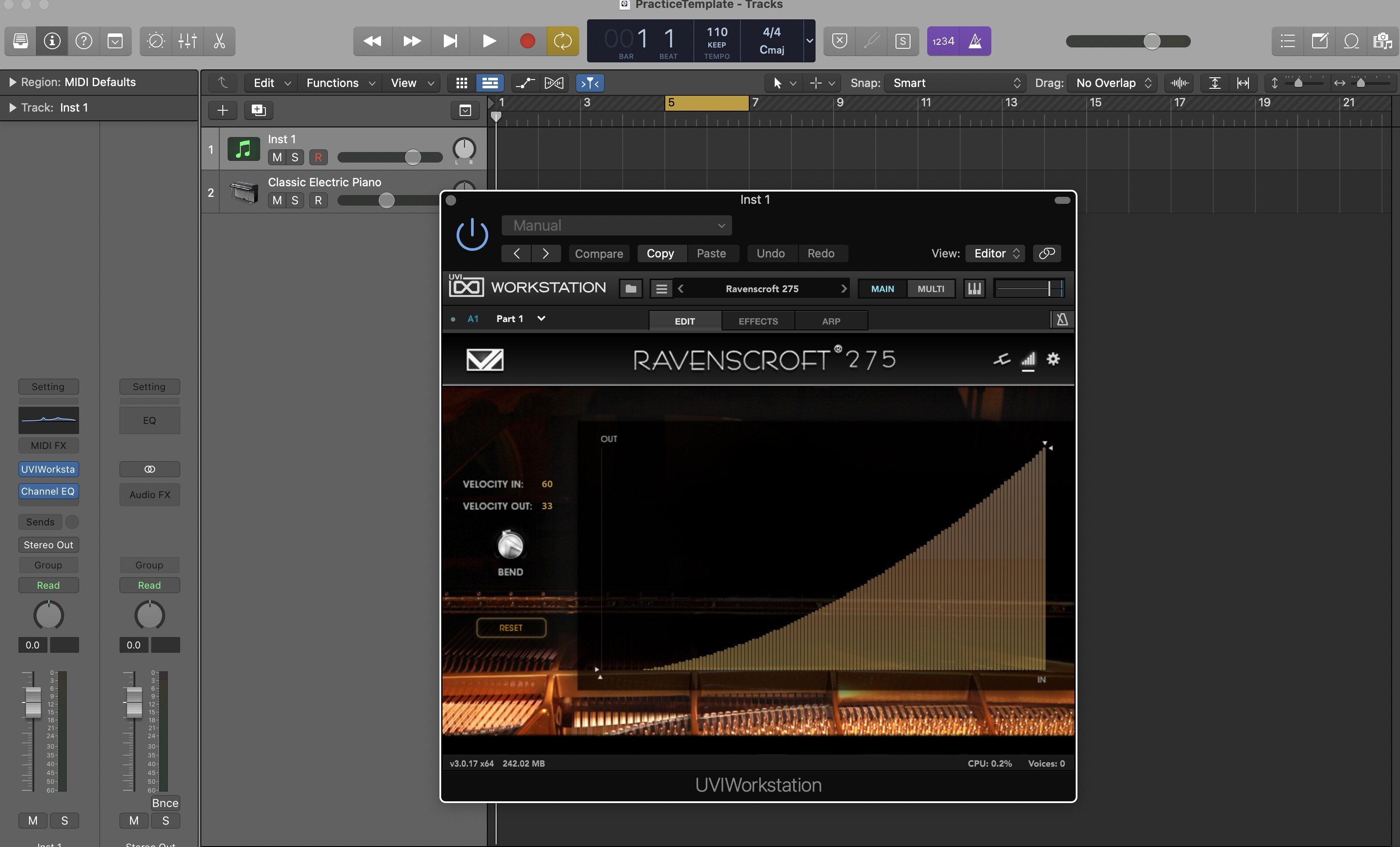 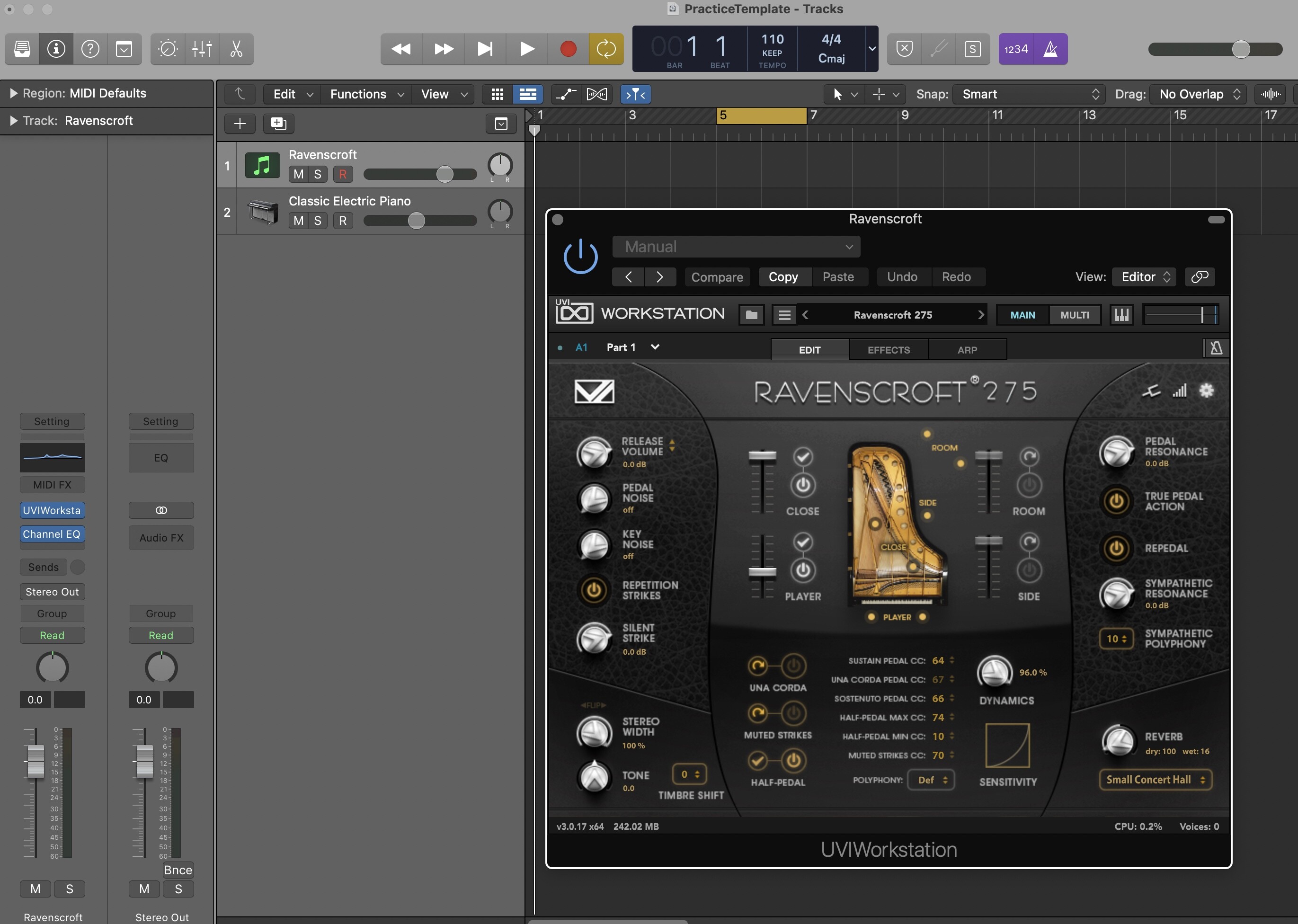 Thanks @scott1 - I wish I had more knowledge to share here. I’m a bit of a rookie with this stuff and luckily I had a friend with some knowledge of audio engineering who set up the Ravenscroft in a Logic workbook for me.

As @gregb mentioned, my Ravenscroft settings are close to default.

One thing I have done recently is upgraded my mic setup and I have learnt a lot about choosing mics, hooking up a mic to logic, using the “cloudlifter” to increase the gain, and then tweaking the settings on the audio interface and in Logic to make sure that the audio is loud and crystal clear without peaking or distortion.

I will create a thread on this topic later this month and hopefully it will be useful for singers, podcasters, and folks who do any type of voiceover work.

I’ve started including the study of Logic Pro into my daily practice sessions. The courses I’m using are on https://www.ask.video/, as I mentioned in an earlier post. Some of the beginning lessons, as well as some of the more advanced ones, are led by Joshua Carney, whom @gregb recommended before.

As with any new software program, it’s somewhat daunting at first. But on a closer look, it’s not that complicated to get to the point of recording your playing for study purposes. Think of when you first learned how to use a word processor. It looks overwhelming, but then you figure out that there’s a lot of stuff you’ll never use, so you just focus on what you need. And when you need something more advanced, you can learn it as you go.

But seriously, that is a very good point. There are ways to create a take folder where you can loop through a certain passage and improvise over it again and again, and then choose the best version, or even create a composite version incorporating several of the various takes. That’s impressive.

Another point that I just came across. You can take notes about the session at both the Project and the Track level. I can see how important that would be for large projects. But it can be of use for those who are at the very basic level. Listen to your recording. Note where you need to focus. Make a note of what you need to work on.

And a final note for now–on transcription. I have a pretty good ear and can work out most things on a note and chord level (with time). But I’m totally hopeless at writing the transcription. Solution? Record it in Logic. Then open the Piano Roll Editor and select Score. All is transcribed there correctly. Open page view and print.

I hope some of this will be of use.

I have a couple of questions:

What is the best audio format to bounce a tune in order to share it in PianoGroove: .wav or .mp3?

More importantly, how do I upload the file to the site?

I just finished transcribing the basic outline of a tune that I’m working on and was fiddling about with it as I try to learn the program. I thought I’d share.

Then start a thread or reply to an existing one, add a sentence or two of explanatory text and click the upload icon (bar with upward arrow) and you should be good to go.

Look forward to hearing what you’re working on!

Thanks @gregb! I just uploaded my first try.

I tackled the learning curve in Logic a few years ago. One of the best resources for me beyond YouTube was the Logic Pro Help forum. I’ve always gotten great help from the community there. The owner of the forum, Dave, literally wrote the book that is used for Logic certification training and he is also very active on the forum.

Thanks Kirk,
That sounds like a great resource. Thanks for sharing.

@gregb,
You said that it "[s]ounded like [I] had three tracks—one for the LH and two for the right, slit between piano and strings. I thought it worked very well.

Thanks for that! However, I only have two tracks.

That’s something fun to play around with. There are so many pads. I spent an hour or more just listening to the various options. Some were totally unworkable with this piece. Quite a few sounded interesting. 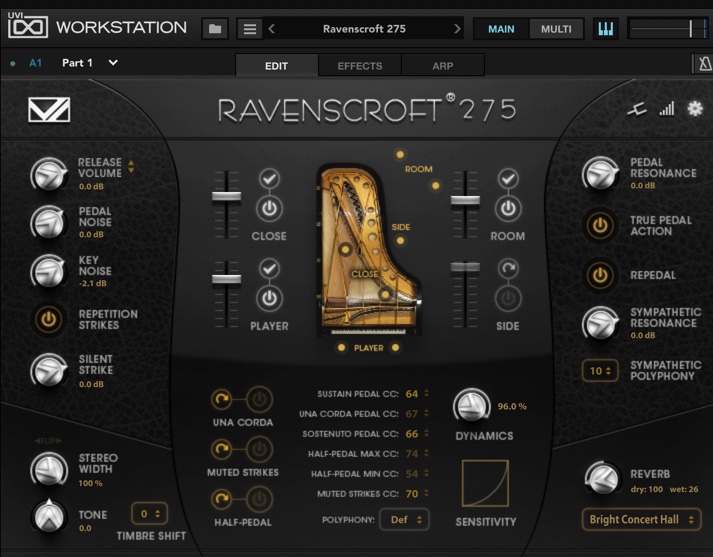 I’m only about 10 days in learning the program. After that brief time, I can now highly recommend the classes I mentioned in my first post above. Apart from the nuts and bolts of recording, mixing, editing, etc. there is a lesson devoted solely to the electric pianos that come with Logic and another to the Hammond B3. The B3 lesson alone is worth the monthly fee. The pianos included in Logic are okay, but the electric pianos are very good, and the B3 is as powerful as any third party plug-in that costs the same as Logic itself.

Again, thanks for listening to “Corcovado.”!

The sound is the “Watery Rhodes” found in the Experimental section of Logic’s electric piano offerings. And that’s what it was in my choosing it–an experiment.

Thanks for your suggestions. That would definitely be one way to play it. I envisioned the track as one to be accompanied by at least a bass and a drum track. I’m trying to figure out how to create a full band in the program. So all this is a learning experience for now.

It really is amazing how much depth there is in such a relatively inexpensive program for what it offers. (Some piano VSTs are around $600.)

I just came across a video that shows how to create a track in iRealPro that you can export to a MIDI file to use in Logic Pro X. The example he uses is pretty basic–as in you probably don’t need iRealPro to create this progression–but it shows how to do it. It might prove useful for practicing solos, especially using take tracks. 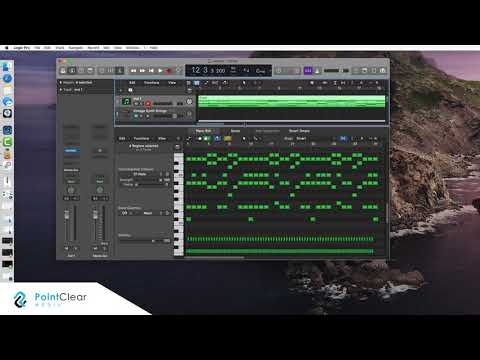 I’ve been working on Clare Fischer’s “Morning,” and started fiddling around to see how I might approach it using Logic. It’ll take a lot of time to work out the whole song, so I figured I’d play around with a few bars to see what might be possible. Here’s a snippet with four parts–electric piano, vibraphone, bass, and drums. @gregb, thought you might be interested.

I’ve been working on the intro to “Rabo de nube” by Silvio Rodríguez in Logic. Here’s a take on the introduction. You may want to turn down the volume a bit. Enjoy!