About Barry Harris voicings
another interesting video that complete the discussion
https://www.youtube.com/watch?v=AF67azWnMvw

he pointed :the Barry voicings scales when alternating C and G on bass sound as V going up to I

I loved Barry Harris story of the ‘world’: the world (chromatic scale), divides into male/female (the two Whole Tone Scales), they had three children (the Three Diminished Chords), and they together had the Dominant Chords. Makes you think.

it’s a good point, the diminished chord is in the end always just a dominant.

Also this approach is very useful in improvisation as well,

Check out Charlie Parker’s composition ‘Bebop’; you hear him using this in the intro: 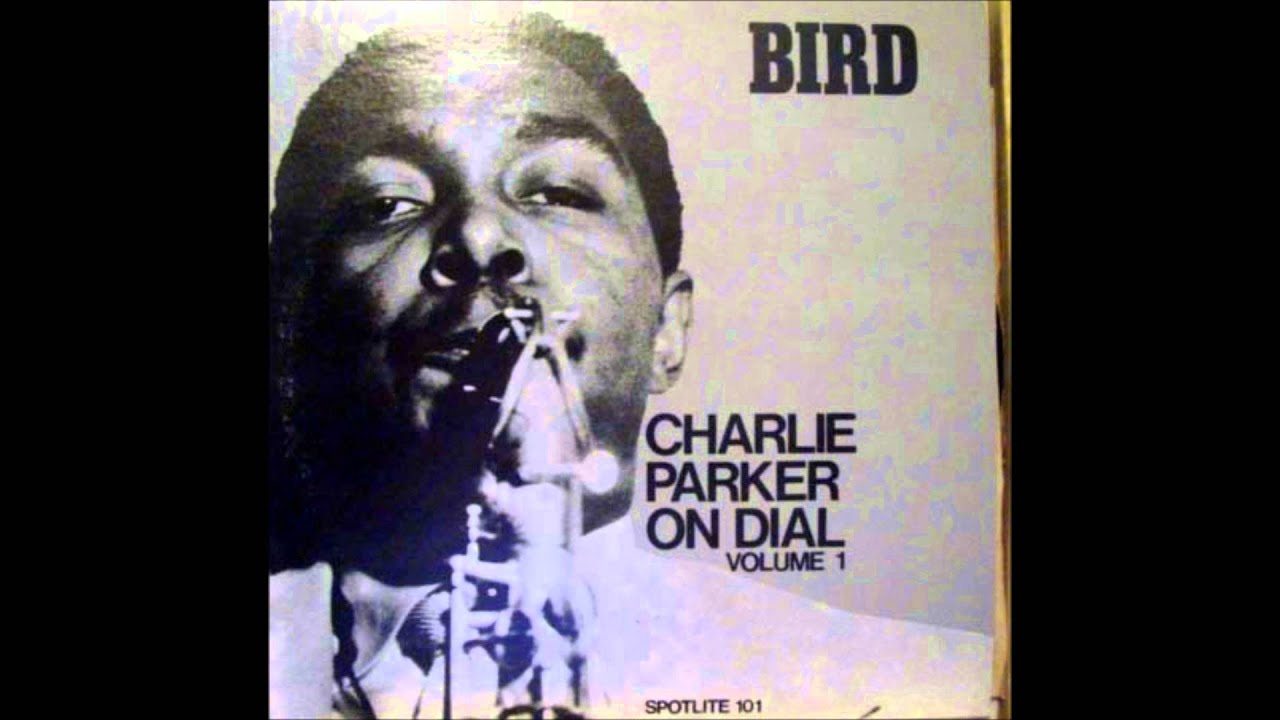 Keep up the good work!

Thanks Tuomo. That is actually very useful for me because I’m a music reader and seeing it makes sense. I’m still working on “All the things you are”, but I’ve also started harmonizing some of my minor key hymns too as an exercise just to see where they go and what they sound like.

I’d love to hear/ read your harmonizations when they are ready! That’s also the easiest way to give feedback and help you with your development.

For me, chord scale relationship is what i have been struggling with on the barry harris harmony.

If i just take a major sixth diminished and think of the ii-v-i I keep wanting to think
ii= dorian with an added flat 5 btwn 4 and 5; v = mixolydian with b2.

Is this how to think about it?

C-6 means the melodic minor to make C, Eb, G, A & D, F, Ab, B. I can understand the Ab as a passing tone, and/or its role in the diminished part of the scale. Its just its seems to me that the C-6 is in a different key that the F7 and the Bb. There’s no Bb in the C-6 scale.

So these two issues have me stumped, believe it or not.

Thanks in advance for any input.

Hi @chris4, thanks for writing!

I understand what you mean, it can get complicated if we dissect it to a very detailed level.

Don’t overthink it, try to see, and especially hear the bigger picture.

First, you can always think diatonically, meaning, if the song is in the key of Cmaj, you can most likely play through it with just using C6/Ddim:

At least you will be able to play a good portion of the song with just this.

Second, when it comes to the 251s you have more options.

Remember, that you should treat 25s as a one thing, not as 2 different chords, as for example D-7 and G7 come from the same core scale (Cmaj), and can be used with or without each other and still function as a 25 to C.

Of course, if the song is in C, most likely the C6/Ddim works over the 25s as well.

Then you can use either D-7(which is of course F6)/Edim, as it is the II chord,

OR the combination of the 2, if the melody for example would go to C, I would use F6/Edim.

And if you need the D- to be half diminished, you would treat it as F-6/Edim, as F-6 is the same chord as D-7b5, just with different root:

Main point is, don’t get too caught up with individual notes, even if they are not a part of a scale, they can work fine within a strong melody, or a harmonic function, for example with the Barry Harris voicings. 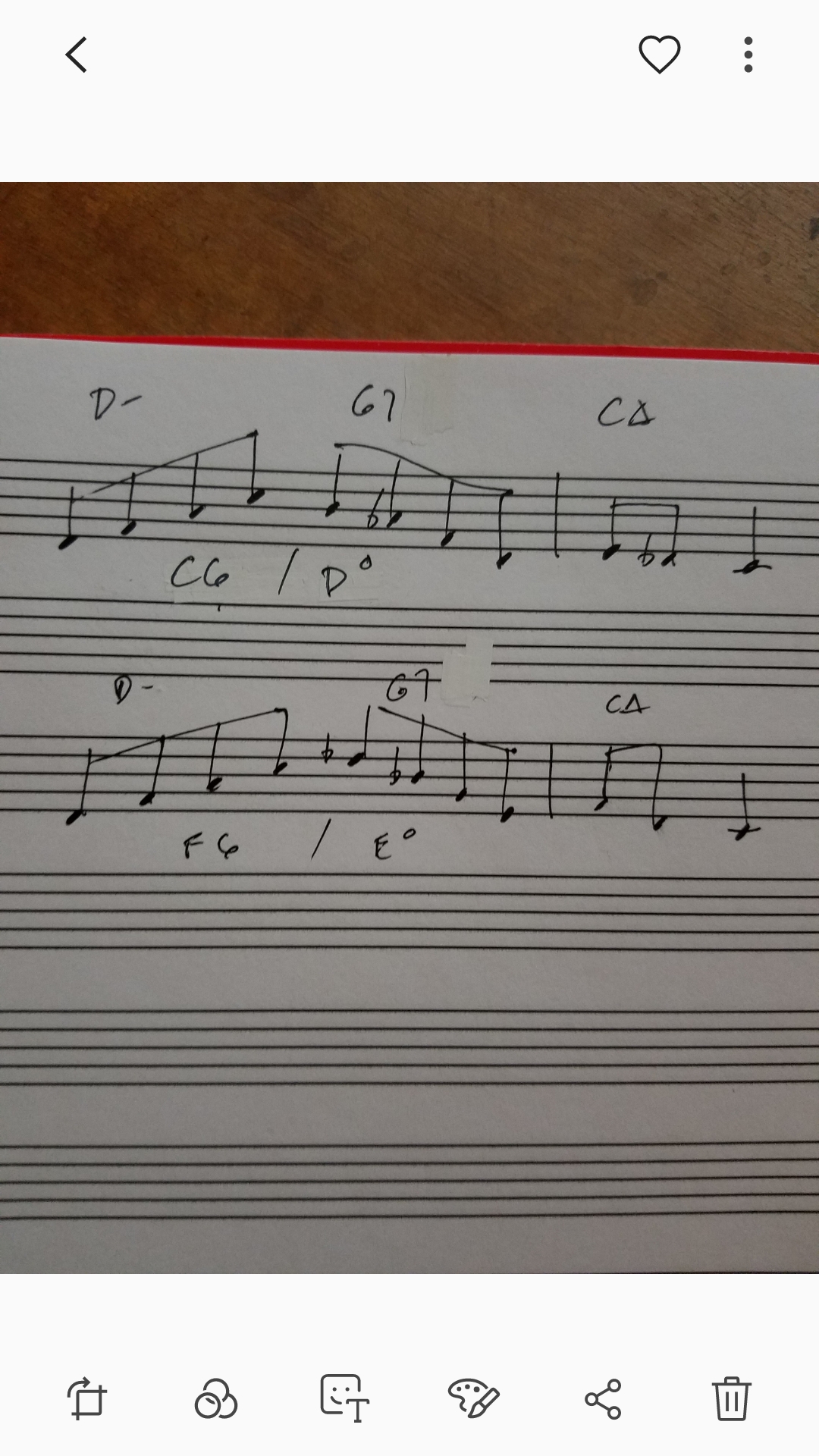 See attached examples. Do i have it right?

To my ear, C6/D dim resolves more clearly to C than F6/E dim.

You’re right, from those 2 melodies the first one resolves better to Cmaj, reason why is not the voicing, but the melody. Remember, everything in improvising is about a good, strong melody, as we talked on our lesson (remember when we started working on the bebop line in every key?)

I’d like to give you 2 exercises; 2 melodies to harmonize by using the Barry Harris voicings:

Remember, your options are:

If the song is in C, most likely the C6/Ddim works over the 25s as well.

The combination of the 2, if the melody for example would go to C, I would use F6/Edim.

And in some cases, you can replace a melody note of the voicing if needed,
check 06:30 from the video: For this masterclass, we will be using closed position voicings, meaning that the notes of the chord are inside a single octave.

Trust your ear more than the theory behind the voicings, if it doesn’t sound right, find another solution.

I think I’ll stick to the diatonic C6/Ddim, til I understand the F6/Edim better.

Yes, it’s good if you stay on the C6/Ddim, that’s always a safe option.

However whenever the melody allows, you can try the F6 as well, and see if you like the sound, for example the notes of the G7 on the first exercise:

Can you advise on the relevance of reading? I work on the Barry Harris stuff alot, and maybe like a lot of folks, want to make a dent in the omnibook to learn bebop.

If nothing else, alot of 2 5 material, plus its like doing Hanon except is jazz.

Hi @chris4, can you give me more detail of what you mean by reading? Maybe an example lead sheet etc?

By reading, I just mean like the way a classical musician may look at mastering a piece of music.

Some pieces - old milestones, little will leaps. I also want to work on passport blues.

I just been working thru them bar by bar, then trying to trying to play the whole phrases. I picked them because I love these pieces, which makes it easy to practice. Its right hand work. Getting the left hand working is difficult.

So that’s kinda what I meant.

What I have made progress with on both hands/chords with melody is lulu’s back in town.

Reading music is without a doubt a vey useful skill. I wish my sight reading skills were better!

However, from a jazz standpoint, I recommend that students do not become reliant on musical notation or transcriptions. Ultimately this is not how jazz is played, or how it was passed down. Jazz is an aural art form and so listening is the ultimate source of inspiration.

Can you post any Barry Harris records you are interested in? and perhaps certain sections of the recording which you like? we will then explain what scales/chords are being used and then the task is to go and figure it out with your ears. I wish I had realised the value and importance of this earlier on in my jazz education.

This way we are not just reading notes from a page, we are absorbing the feel, the articulation, the phrasing, the accents, and other nuances that simply can’t be communicated through notation.

@Tuomo can help you with any record you are working on, post the YouTube URL and we will explore it further.

I will move this to the Barry Harris tread to keep this thread on topics.

Hi guys, I agree with Hayden, best way to learn jazz songs is by listening different records, and even learn to sing the melody before taking the sheet music.

@chris4, I would recommend to think of the sheet music more as a supporting material than the main source of information.

Anyway in case you’re learning from a lead sheet, your approach is a good start; learn one bar at a time, and the connect them into bigger sections.

If the lead sheet has only right hand melody written out, you can add simple voicings to the left hand; for example by using only the root, 3rd and 7th of each chord.

Let me know if you have any further questions,