Starting early September, @Jovino will be doing a monthly live event on PianoGroove.

The live event topics will cover harmony, improvisation, rhythm, technique, composition, and listening. I have created a poll below with the topic areas and more information on these at the bottom of the thread.

Jovino’s first live event is scheduled for 9th September at 9AM PST.

Here are the broad topic areas for Jovino’s live events.

Based on the responses we will then schedule some more specific event titles. Check out the full descriptions below the poll and cast your votes here (max 3 votes per person)

Brazilian rhythmic patterns and their possibilities for variation

For all musicians. An extensive presentation and musical analysis of several rhythms from Brazil, including samba , baião, maracatu, frevo and many more. Examples are taken from recordings and also from live playing by Jovino. Suggestions on how to adapt these musical ideas for any instrument are also given.

Beyond scales and modes: a new approach to improvisation

For all melodic and harmonic instruments. An alternative to the traditional, scale-oriented approach to improvisation in contemporary music. Using a concept originated by Jovino’s musical mentor, Hermeto Pascoal , participants are shown how to employ simple triad-based motives to create elaborate and harmonically sophisticated melodies, taking full advantage of the harmonic potential of each chord. This discovery usually brings an enormous sense of musical freedom with it, allowing one to think simply while performing complex musical ideas.

For pianists and keyboardists. A strong emphasis is placed on modern voicings for a wide variety of chords, the use of contemporary and traditional rhythms of the world in accompaniment and soloing. Several examples are drawn from recent pieces by some of today’s most creative composers.

For all who like Brazilian music and would like to know more about its origins and developments. 500 years of history in a lecture with lots of recorded music samples presented in an easy to understand, conversational manner.

Coming together: The Rhythm Section as a cooking pot

Catching the lizard by the tail

Developing reflexes as tools for composition. For all composers. Participants will learn about ways to draw inspiration from many situations, and how to develop their reflexes as composers, catching ideas as they first appear. Jovino will demonstrate how the creative process occurs, using examples from existing pieces, and often composing new music on the spot.

For all levels. One hour spent on a guided audio tour, listening to music of all colors from many places. In a group discussion after each piece, we bring forward ideas about the basic elements of music, and how they are perceived by musicians and non-musicians. A useful tool in the development of the musical ear.

Hello, Jovino Santos Neto here. I am looking forward to seeing you on September 9. I am excited to share some music and to answer your questions on this live event. See you then!

These are all going to be SUPER EXCITING

Thanks so much for the wonderful updates!

Click below to register for Jovino’s live session on Wednesday 9th September.

This live session will cover “Beyond scales and modes: a new approach to improvisation” - as voted for in the poll.

Click the link above to submit your improvisation-related questions to be covered by Jovino in the session. If you cannot make the session due to time zones, you can still submit your questions and watch the archived version of the event.

This Event Will Take Place At:

Upcoming live events will be scheduled at a selection of times to accommodate for our students on all time zones. Cheers.

Looking forward to it!

have now registered and submitted my questions! Yipeee.

Such an AMAZING lesson! did put my alarm clock on

Cannot wait to re-watch everything in the archive section, please! Thanks so much, Hayden! the Live lessons are soooo worth our time

I’m glad you enjoyed the session!

Whilst we are building the archive pages, you can rewatch the session on the original URL:

The new LIVE section of the website is coming along nicely and as soon as it’s finished all of the previous live sessions will be archived with chapters, commenting, and downloads.

Here’s a preview of the archive page design:

Esta é uma masterclass maravilhosa. Thanks so much!

Re playing in a natural, organic, multi-dimensional way-- I love this moment (along with many moments) at 37:35 “You’re no longer a train. Now you’re a helicopter – or a hummingbird… Or even better think of yourself as a primate, because that’s what we are.” I can hear the student of biology there so frequently.

I clicked on the link. The image comes up, but there’s also this:

Page not found. The embed code for this chat is not valid.

Just thought you should know. Cheers.

…now back to watching

Thank you SO MUCH for the link!!!

So excited to see that Jovino is teaching this subject online (live/Zoom) at my “alma mater” this upcoming fall session. Beyond Scales & Modes: A New Approach to Improvisation, Jovino Santos...

For all melodic and harmonic instruments. An alternative to the traditional, scale-oriented approach to improvisation in contemporary music. Using a concept originated by Jovino’s musical mentor, Hermeto Pascoal, participants are shown how to employ...

@Jovino is hosting a live seminar on Wednesday 16th December at 5pm UTC.

Learn more below, add to your calendar, and submit your questions for Jovino to answer:

In this workshop, participants will learn how to draw inspiration from many situations, and how to develop their reflexes as composers by catching ideas as they first appear. 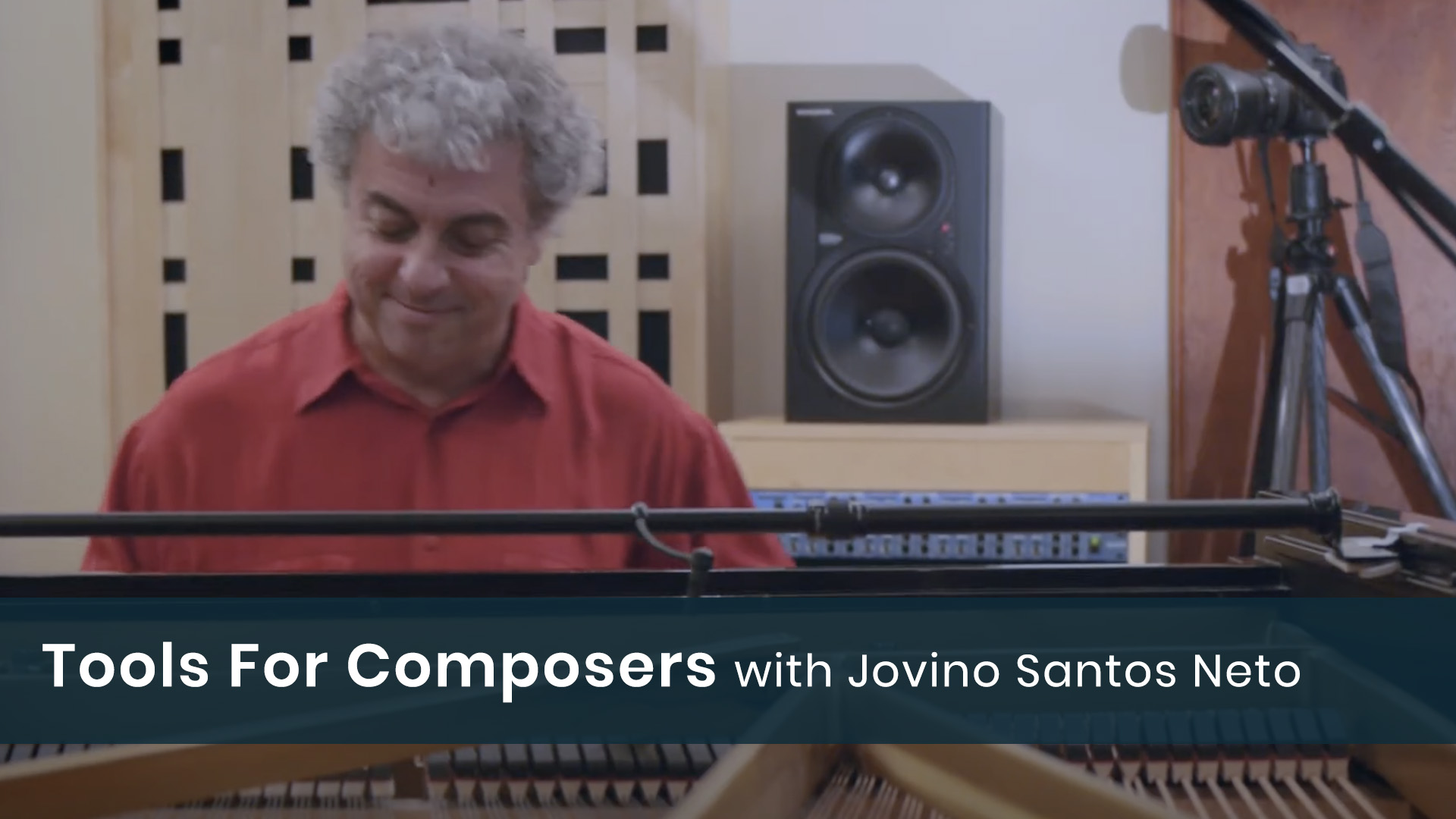 Add this event to your calendar

Click on the icon of your calendar app below for the exact start time on your time zone and to be notified 1 hour before the event starts:

If you have a question on composing music, click the button below and email your question in for Jovino to answer during the session:

Hope to see you there!

Great seminar :: thanks so much !!

@Jovino, you talk about playing some ballads and keeping in head the rhythmic of samba … could you talk a bit more about it, maybe some exercices to dive in even more inside . I understand each exercice you already give is the fondation to go there , to take time to absorb all that , but maybe some specific exercice for ballads ?
I am learning the beautiful “Luiza” from Jobim and i feel that’s what missing in my playing, this could be a great help.

Thanks a lot Jovino

PS I dont know where to post comment about Live Seminars . Sorry if not the right place.

I agree. That was a really great lesson with lots of great ideas for practice.

A question for anyone- I couldn’t rewind or fast forward the seminar when I watched it. Does anyone know if that facility exists for watching the live seminars?

Just to clarify- I"m asking about whether you can rewind/forward live seminars when watching the recorded versions not when they are being broadcast!!

A question for anyone- I couldn’t rewind or fast forward the seminar when I watched it. Does anyone know if that facility exists for watching the live seminars?

I have added the speed controls, A/B loop and the seminar chapters so that you can more easily navigate the recording.

The 10-second skip back button is not currently showing which I will fix.

PS I dont know where to post comment about Live Seminars . Sorry if not the right place.

The comment system on that seminar page is now showing. It doesn’t appear until I add the chapter markings which I have just added

You can post comments either on the page or here in the forum.

@RicardoBenitez - I also added the scores for the tunes that we covered in the seminar - see the “Seminar Downloads” section.

If I remember correctly this was requested in the live chat during the session.